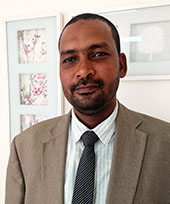 Mutwakil is a well-known and descendent from a famous family that developed education and the role of law in many part of Sudan. His ambition and dedication to develop the legal profession has never ended. Graduated in 2002 from Al-Neelain University (Previously University of Cairo-Khartoum Campus) – Faculty of Law and passed the legal profession examination instantly to start working at Hashim ElAALI’s legal firm in 2004 till 2007. In 2008, established his new office at the city centre and specialized in fraud, forgery and criminal cases in general.

After his successful start in his solo practice, he merged his business and became a partner at Bannaga & Fadlabi LLP representing many clients mostly international investor. In February 2016, he passed the examination and the requirements for notarization authority and granted, by the Chief Justice, the authority of notarization.

Mutwakil also is a dedicated researcher. He completed a significant research in developing the high education Sudan where he supervised the data collectors and analyzed the laws and rules pertained to the high education making him a cornerstone in the development of a new College in Sudan that follows the British education system. The research opened a new discussion on the potentials of the public universities and its current performance. He as well drafted a comparative study between the international conventions and the local regulations and laws on protecting environment. This legal study was a part of a comprehensive environmental assessment of the Greater Khartoum funded by the government of Khartoum State the Capital of Sudan.