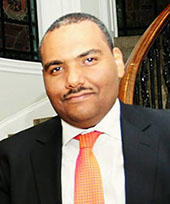 Ahmed is a member of the Chartered institute of Arbitrator of London holding the title of MCIArb. He graduated from SOAS, University of London with LLM in Dispute & Conflict Resolution where he specialized in international arbitration. He is now the Representative of the Sudanese Bar at the Solicitors Regulation Authority in England & Wales (SRA) of London and managed to get the SRA approval for the Sudanese lawyers to entre Qualified Lawyers Transfer Scheme without any preconditions to be qualified as a Solicitor in the jurisdiction. He has been credited as an arbitrator in the most known arbitration centres in Sudan, the Arab Centre for Arbitration & the Sudanese Arbitration and Conciliation Centre.  Lately, Ahmed has been appointed as a lecturer at the University of Medical Science of Technology  - Faculty of Law.

Ahmed represented many clients such as Omdurman National Bank, Ba'boud Company for Trading, and many other international companies. He also represented clients major cases against Bank of Khartoum ( a subsidiary to Dubai Islamic Bank), The Security & Intelligence Service, Qatar Charity.

Ahmed has been assigned by Sudanese businessmen to represent them in international contracts abroad in many countries that have been funded by many international bank such as the Arab Bank for Development in Africa, the OPIC Fund For international Development – Vienna and the Saudi Fund for Development – Riyadh KSA. He has been selected as ILFA Lawyer in 2017 for their flagship programme taking place in London and Dubai. ILFA is a known organization “International lawyers for Africa” and seconded to King & Wood Mellesons (MENA) LLP – Dubai- UAE. He was working directly under the managing Director Mr. Tim Taylor QC. He later joined Quadrant Chambers – London- UK under the supervision of Mr. Chirag Karia QC